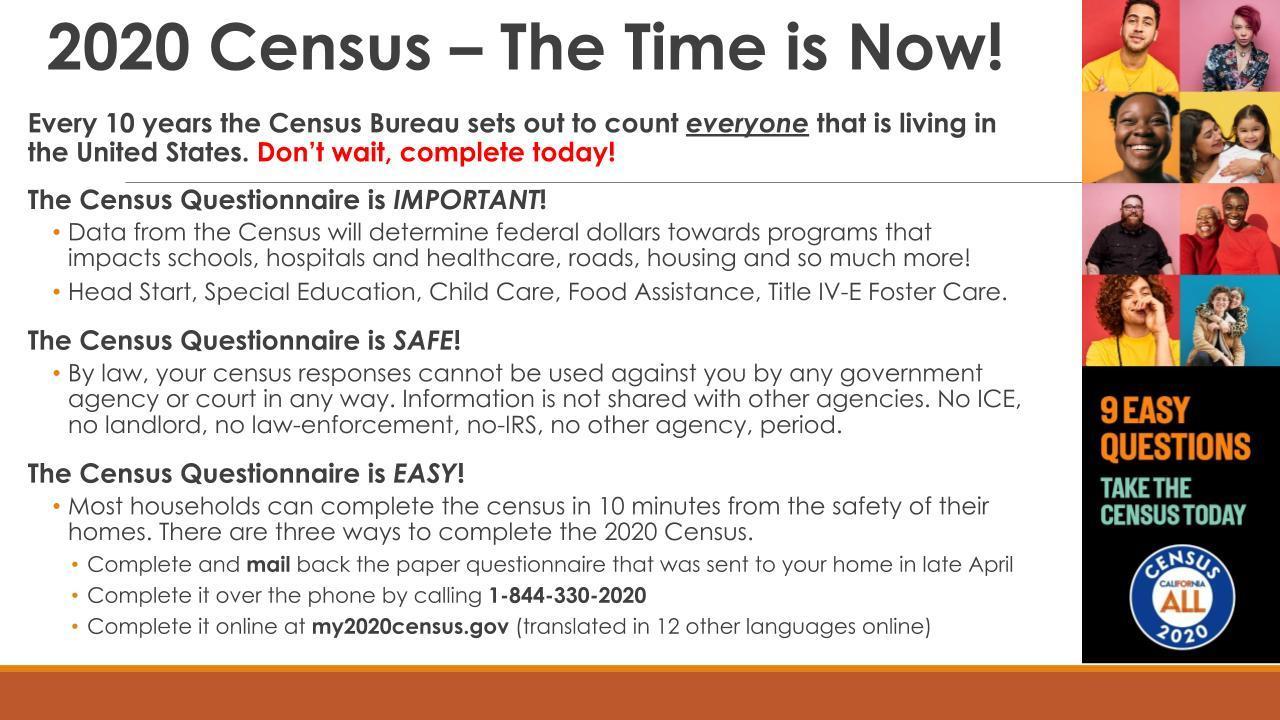 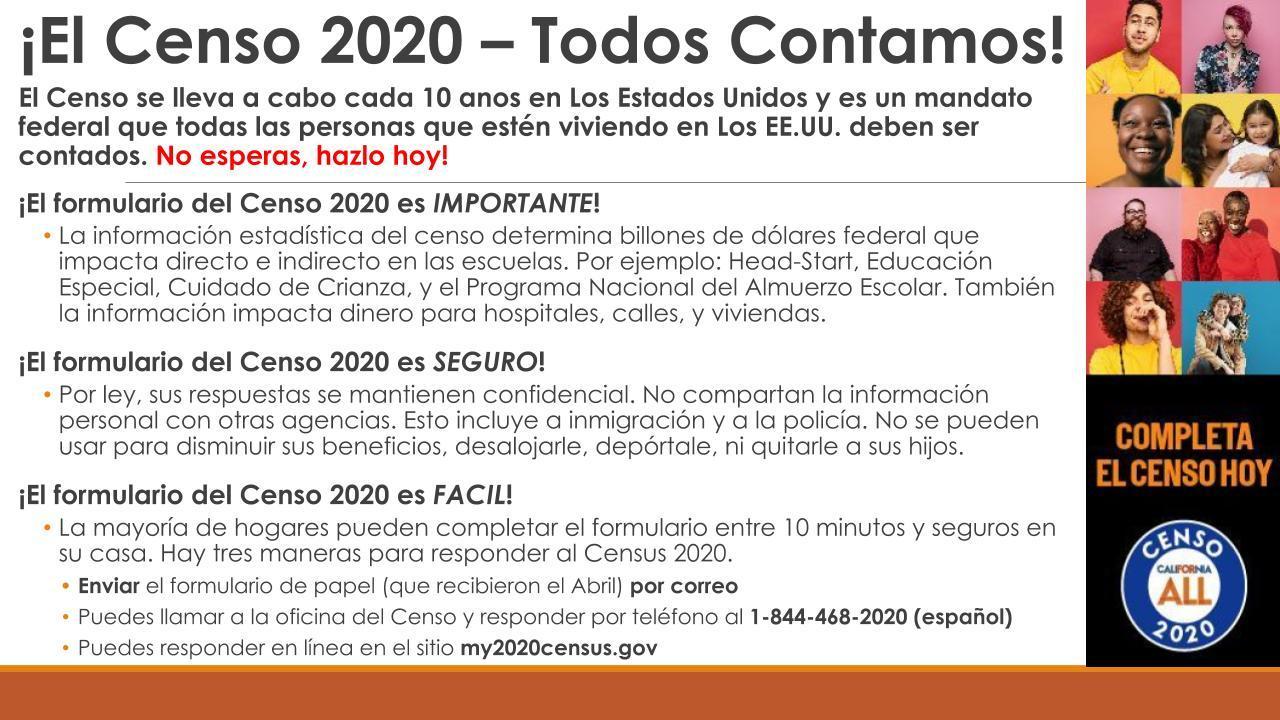 A Message from Principal Hagman

I am writing to share very important information about an event that will take place in Spring 2020: the U.S. Census. The census is a count of all people living in the U.S. and takes place every 10 years. It is simple and confidential to complete. For the first time, you can respond online. You will receive a unique identifying number in the mail, which will allow you to fill out the online form beginning in March 2020. Here are some things you should know:
Your identity remains anonymous. Any personal information you provide on the census form is protected by law and cannot be shared with anyone or any other federal agency. Regardless of your immigration status, the information cannot be used against you or to invade the privacy of you or any members of your family.
The Census is important. The Census is important because it helps to decide how much federal money our schools will get over the next ten years, and how much money our state will get for our parks, neighborhood improvements, public health, transportation, and many other programs and services.
The Census is safe. All the data collected through the census is protected under Title 13 of the U.S. Code. All U.S. Census Bureau employees swear a lifetime oath to protect respondent information. The U.S. Census will never share a respondent’s personal information with other government agencies. Data is only released in summary tables; no individual records are released.
What do you need to do? Your kids count, so make sure to count them when you fill out the census form-there's still time. When you receive this information, log-on and complete the census information for your family. If you need assistance, please reach out to us, we are here to help.
For more information regarding the U.S. Census, please visit the following websites:
https://californiacensus.org/
https://www.census.gov/
Sincerely,
Mrs. Melanie Hagman

Learn More About the Census Here-

The Importance of the Census

The U.S. Constitution mandates that a census be taken every 10 years to count all people—both citizens and noncitizens—living in the United States. Responding to the census is mandatory because getting a complete and accurate count of the population is critically important. An accurate count of the population serves as the basis for fair political representation and plays a vital role in many areas of public life.

Here are six key areas where the information collected in the 2020 Census will help drive policymaking and shape the future of the United States.

State population counts from the decennial census are used to reapportion seats in the U.S. House of Representatives. No state has permanent claim to their current number of assigned House seats. State population counts determine how the 435 seats are split across the 50 states based on each state’s share of the national total. After the 2020 Census, southern and western states are expected to gain seats—and political clout—at the expense of states in the Northeast and Midwest. The Census Bureau will publish apportionment population counts by December 31, 2020, affecting the size of state delegations for the 2022 U.S. House elections and state votes in the U.S. Electoral College for the 2024 presidential election.

State and local officials use decennial census results to help redraw congressional, state, and local district boundaries to contain roughly equal numbers of people to ensure each person’s voting power is closely equivalent (meeting the one-person, one-vote rule). The Census Bureau will publish redistricting data no later than March 31, 2021—within one year of Census Day.

3. Money to States and Localities

Census totals help determine the amount of funding that state governments and local communities receive from the federal government for the next decade. Census Bureau data were used to distribute more than $675 billion in federal funds to states and local communities for health, education, housing, and infrastructure programs during Fiscal Year 2015. Accurate census counts ensure that funding is equitably distributed for numerous programs such as Medicaid, highway planning and construction, special education grants to states, the National School Lunch Program, and Head Start.

Data from the census inform a wide range of government, business, and nonprofit decisionmaking. Governments and nonprofit organizations rely on decennial census data to determine the need for new roads, hospitals, schools, and other public sector investments. Census data are also vital to businesses as a key source of information about the U.S. population’s changing needs.

Detailed population information is critical for emergency response in the wake of disasters. First responders and disaster recovery personnel use census data to help identify where and how much help is needed. Similarly, demographic details from the census assist epidemiologists and public health personnel in everything from tracking disease outbreaks, to combating the opioid epidemic, to improving child health.

6. A Base for Federal Surveys

Decennial census data provide a population base for dozens of federal surveys. The Census Bureau’s Population Estimates Program uses census data in combination with birth, death, and migration data to produce annual population and housing unit estimates. These estimates are then used as population controls for the American Community Survey, Current Population Survey, and many other federal surveys—so that the numbers of housing units and people in certain categories agree with the Census Bureau’s official estimates.